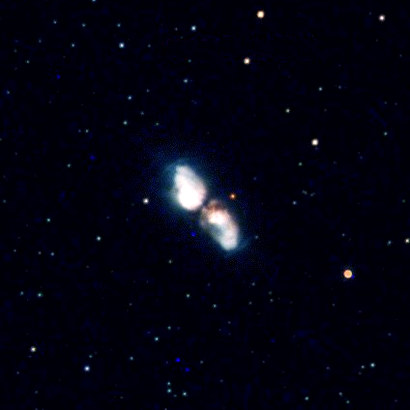 The Silkworm Nebula is a visibly diffuse region composed of gas and dust. The term planetary nebula came about not because of any real association with planets, but because in early telescopes objects of this type often appeared planet-like to the astronomer - even glowing with a bright green color. We now know that green color to be from very hot oxygen atoms in the gas surrounding the central star.

After a star has depleted the majority of its nuclear fuel, profound changes occur as it enters a poorly understood phase of evolution. First, a combination of stellar pulsations and radiation pressure drives the atmosphere outward, forming an extended envelope around the star. The envelope can be so large that, if such a star were our Sun, the gas and dust expelled from the star might extend many times farther out than the average distance of Pluto to the Sun.