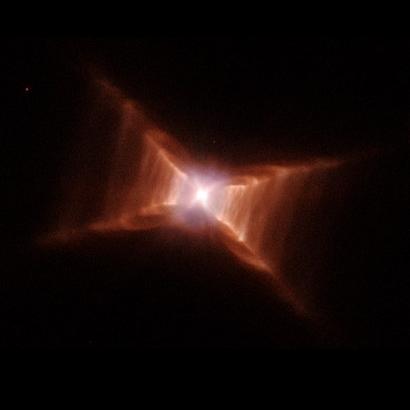 Outflows of gas and dust are ejected from the Red Rectangle in two opposing directions, producing a shape like two ice-cream cones touching at their tips. Also remarkable are straight features that appear like rungs on a ladder, making the Red Rectangle look similar to a spider web, a shape unlike that of any other known nebula in the sky. These rungs may have arisen in episodes of mass ejection from the star occurring every few hundred years. From our vantage point the rungs are seen exactly edge-on so they appear as straight lines.

The star in the center of the Red Rectangle is one that began its life as a star similar to our Sun. It is now nearing the end of its lifetime, and is in the process of ejecting its outer layers to produce the visible nebula. The shedding of the outer layers began about 14,000 years ago. In a few thousand years, the star will have become smaller and hotter, and will begin to release a flood of ultraviolet light into the surrounding nebula, producing what astronomers call a planetary nebula.

The Red Rectangle was first discovered during a rocket flight in the early 1970s, in which astronomers were searching for strong sources of infrared radiation. This infrared source lies about 2,300 light-years from Earth in the direction of the constellation Monoceros. The name Red Rectangle which was coined in 1973 by astronomers Martin Cohen and Mike Merrill.